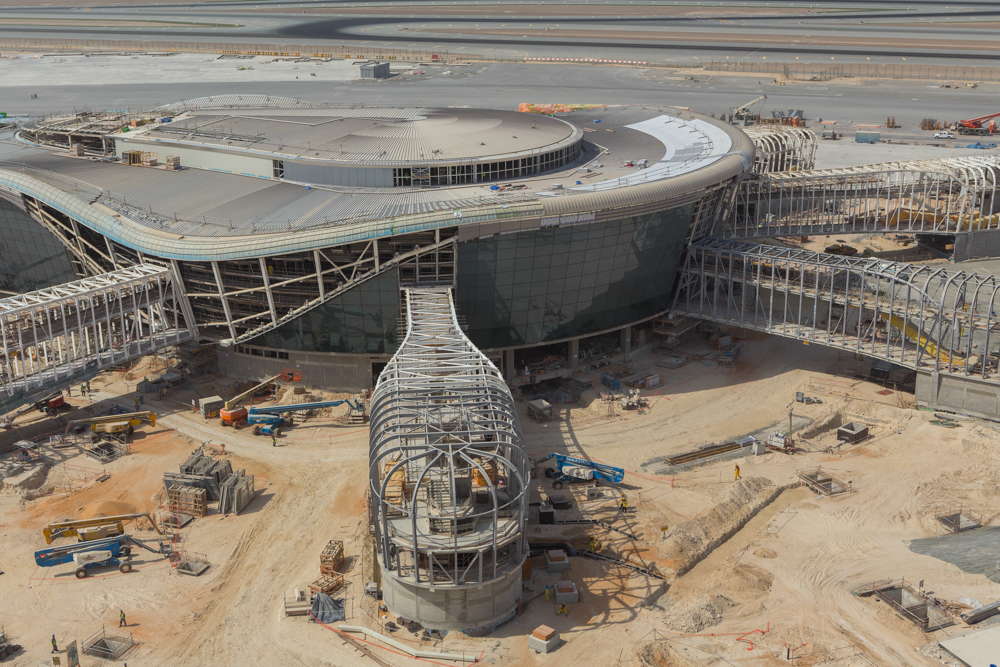 Abu Dhabi, August 29 – Abu Dhabi Airports has confirmed that work on its new Dhs 10.8bn Midfield Terminal Building is progressing on schedule and that the project is currently 55% complete.

The announcement came as the process of de-propping the massive 20,000 tonne curved roof of the building began which will give the impression that the state-of-the-art looking structure is floating on 18 steel arches.

In this first of nine de-props, a team of 45 specialists, with 60 hydraulic jacks, systematically removed 30 temporary supports used for constructing the roof element, in one of the most complex engineering feats of the multi-billion dollar infrastructure project.

The supporting structure for the MTB central roof consists of 18 inclined arches of varying heights, and a roof grillage in total weighing around 20,000 metric tons. By completing the de-propping process by February 2016, the roof will be a free-standing structure, floating above 18 mega arches, which will feature the world’s longest indoor arch spanning 180m, at a height of 52m, with a weight of around 1000 metric tons.

Commenting, H. E. Ali Majed Al Mansoori, Chairman of Abu Dhabi Airports, said, “It is truly amazing to witness this great progress. We are extremely proud to maintain our track record of achieving key construction milestones safely in spite of the project’s architectural complexity. Currently the whole project is 55% complete and it is expected to be 70% complete by the end of 2015. We owe this tremendous success to our outstanding construction team, the contractors and the Capital Projects & Construction Division, for masterminding a cutting edge approach for this immensely complicated task. The MTB’s presence on Abu Dhabi’s iconic skyline is reflective of our unwavering commitment towards the redevelopment of the Emirate’s aviation infrastructure.”

H. E. continued: “The MTB is set to become the gateway to the capital city and plays an important role in raising the profile of Abu Dhabi as a world-class transportation hub. It is also contributing to the diversification of the Emirate’s economy by fostering growth in other industries through increased connectivity.”

The design of the MTB is directly connected to the engineering concept behind the steel roof arches. Each arch rises above its base in an inclined format, rather than a vertical design that is commonly used. The first base for the Midfield Terminal Building’s roof structure, which holds nine symmetrical arch segments, was assembled in October 2013, while the complex erection of the first elements was completed early last year by means of two 80T mobile cranes and two high capacity movable tower cranes. The movable mobile tower crane (model: D1100-63) is the biggest of its kind ever used in the Middle East.

Chief Programs Officer, Sulaiman Al Siksek commented: “Although we’ve reached a milestone on this project by beginning the de-propping, the hard work on creating this iconic terminal building continues. We have an army of 20,000 workers on this 3.5 million sqm site, supported by a fleet of the latest construction equipment, including 24 tower and mobile cranes. The steelwork for the four piers is complete and good progress is already underway for the enclosure structure, including the glass curtain walling and roofing for the four piers.”

Once the building envelope and glazing for all four piers is finished later this year, the focus will then transition towards work on the inside of the building: fit-out, systems integration and all other required infrastructure such as the state-of-the-art baggage handling system, with a capacity to handle over 19,000 bags per hour through its ten reclaim carousels and 27km of conveyors.

The MTB will not only look spectacular, it will also boost Abu Dhabi International Airport’s total capacity to over 45 million passengers a year.