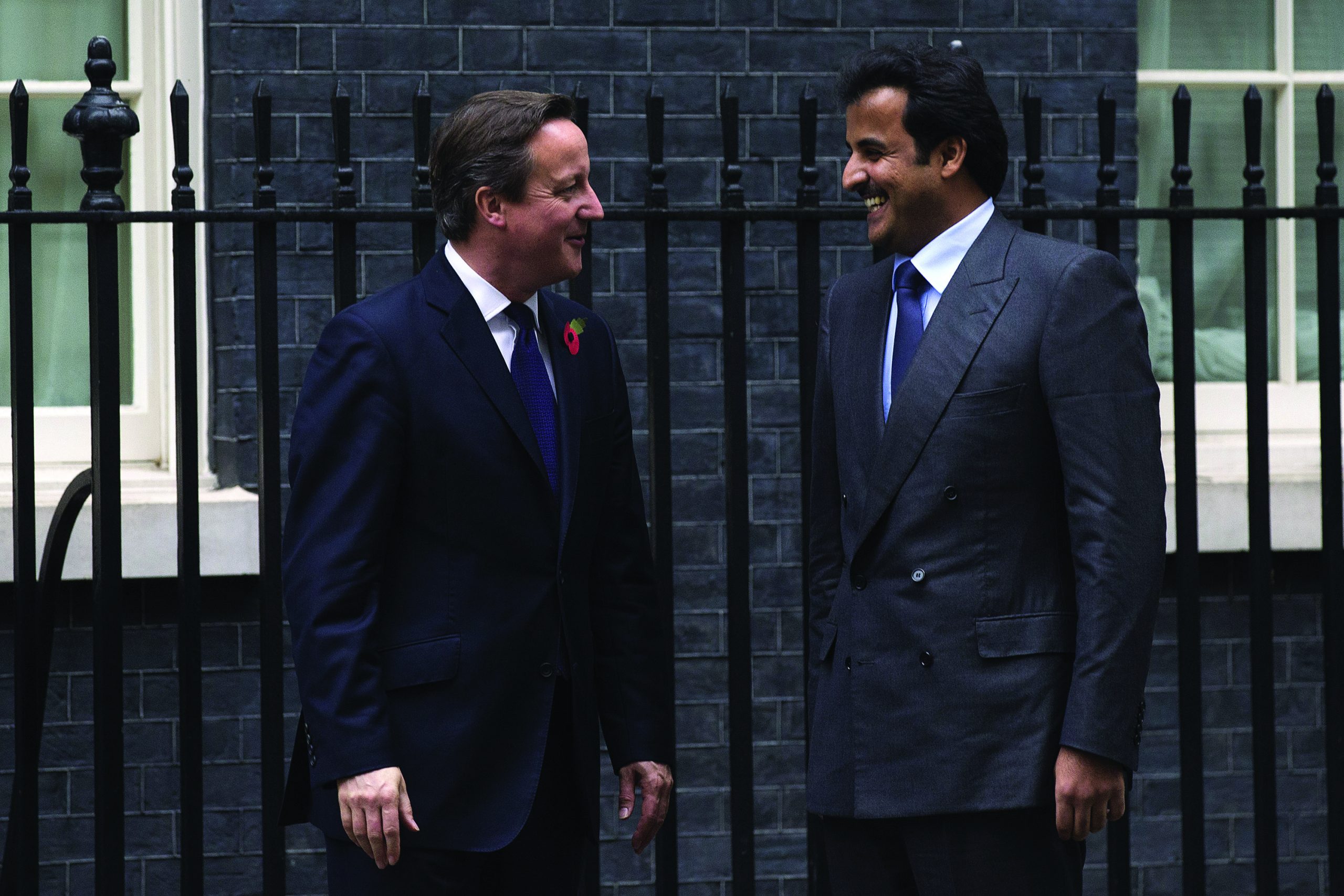 It’s no secret that the world’s hydrocarbon economies are being forced to undergo a process of diversification away from oil and gas and into value added products and services. Qatar has enshrined this diversification into its national plan, but the growth story has many instructive facets. Paul McNamara reports

Savvy governments in the GCC are spending a lot of time planning for a world in which oil and gas revenues are no longer the most significant factor funding their national development. Natural resources are a diminishing resource and while exploiting them more efficiently is certainly on the agenda, finding other sources of revenue offers a longer-term solution to forward-thinking governments. This has prompted a number of governments in the Gulf region, with Qatar at the head of the pack, to focus on sustainability, digital business, e-commerce, aviation and much more. The basic game plan is pretty simple: build an economic foundation for the next generation from new business lines and investments that produces the same levels of income currently generated from oil and gas.

Naturally this means a big role for sovereign wealth funds like the Qatar Investment Authority and other state-owned investment vehicles. But it also means big opportunities for the rest of the business sector in Qatar; small, medium and large, as well as for their business and investment partners the world over. The opportunities seem endless and touch on every segment of the economy as Qatar starts to spread its wings.

Recent instances of this new investment focus are not hard to find. Some are relatively straightforward such as the state-run utility, Qatar Electricity & Water Company (QEWC), which has just announced plans to increase the desalination capacity at its Ras Laffan project to 65m gallons per day from 35m gallons per day. By any measure this is breathtaking growth and its like has rarely been seen before. The project is slated to begin in the first half of 2017, but the hard work has already begun. QEWC’s financial results for the first nine months of 2014 showed an increase of 11 per cent in net profit on the corresponding period last year to $322m, giving some sense of the natural growth in the Qatari economy as well as the need to plan big for the future. Reinvesting these profits gives a through-the-looking-glass example of the future of business in Qatar.

On a grander scale Qatar Investment Authority (QIA) is looking increasingly to China, north Asia and Singapore in the medium- to long-term as the place where the best returns are likely to be had for an earmarked $15bn-$20bn of its war chest. QIA manages an estimated $304bn of holdings in total. While some of these new markets are well developed, some of them are virtually frontier markets and this begins to hint at the increasingly sophisticated investment strategy being deployed by QIA. Recent headline deals between QIA and Hong Kong’s Lau family look set to involve a full takeover of the department store operator, Lifestyle International Holdings, and taking the $2.9bn company private.

While the Lifestyle acquisition is QIA’s maiden major acquisition in Asia, QIA is no stranger to the luxury consumer sector, owning Harrods in London as well as a 13 per cent stake in Tiffany & Co. QIA has also been trying to buy HSBC’s global HQ in Canary Wharf, London – the capital’s biggest and most expensive office building, on which HSBC has a 13-year lease. The takeover bid involves both QIA and Canada-based Brookfield Property Partners. The skyscraper’s owner, Songbird Estates, has now twice rejected the joint takeover bid. On 4 December, Songbird stated that it considered the bid did not reflect the true value of the company, even after the original bid made in early November was raised from $3.4bn to $4bn.

In the financial services arena, QIA already has stakes in Barclays and the Credit Suisse Group while the global reach of some of Qatar’s other finance houses also continues to grow. Leading regional institution, Qatar National Bank (QNB), has recently increased its stake in African lender Ecobank Transnational after upping its stake to 23.5 per cent. In a statement QNB said that it had raised its stake after spending $283m to buy an additional 11 per cent share in the lender. Only weeks earlier the bank had bought a 12.5 per cent stake worth about $220m from Nigeria’s Asset Management Corporation.

QNB had previously made public its vision of becoming the largest bank in the Middle East and Africa by 2017. At present QNB is second in terms of assets behind Standard Bank of South Africa and QNB has had the African continent under the microscope for years. QNB knows that it has NBAD from neighbouring Abu Dhabi hot on its heels in the African banking sector and understands that speed is of the essence in concluding big deals before asset prices skyrocket.

Qatar Airways, one of the fastest growing carriers in the world, is also not resting on its laurels. Over recent months the airline has announced that it intends to buy 20 Gulfstream business jets in order to more than double the size of its corporate charter fleet. The airline’s plans include orders and options for the new wide-cabin Gulfstream G500 and the extended-range version of the G650ER, the world’s biggest and quickest business jet. The G500 will be used for flights from Qatar to London, Geneva and Paris, according to the airline. Akbar Al Baker, Qatar Airways CEO said, “In order to keep pace with the future strategic growth plans of our private jet division, the fleet is being expanded with aircraft that meet the needs of our guests, providing a wide range of options.”

Elements of the world media have also dined out on stories of low wage levels and poor safety standards for migrant workers, mostly from the Indian subcontinent, who have been drafted in to undertake much of the new construction being seen in Doha, the emirate’s capital. Similar accusations have also been levelled at Lebanon, Saudi Arabia, Jordan, Bahrain, Iraq, Kuwait, Oman, and the UAE in recent years.

Global firms that have outsourced and offshored their call centre work to places like Bangalore and Manila will understand why cheaper labour costs are desirable but it seems likely that the Gulf states will have to improve their levels of transparency before the ‘exploitation’ bogey man is put to rest. Gulf Cooperation Council ministers are in the process of preparing to ratify a new draft employment contract that will cover maids, household workers as well as manual labourers.

New contracts should limit the working day to eight hours, with two hours overtime and guarantee of a day off every week and annual leave. In addition to this, all of the GCC states have either introduced their own reforms or are looking at national legislation to protect domestic worker rights in a more structured way. Qatar says that next year it will reform its kafala or sponsorship system and will redraft the requirement of workers to secure their employer’s permission to leave the country.

Sheikh Tamim bin Khalifa Al Thani, the emir of the nation since June 2013 when his father abdicated, has also come under increasing scrutiny over his involvement in the religious politics of the region. The CIA Factbook seems fairly sanguine about the new Sheikh: “Tamim has prioritised improving the domestic welfare of Qataris, including establishing advanced healthcare and education systems and expanding the country’s infrastructure in anticipation of Doha’s hosting of the 2022 World Cup.”

Cynics suggest that elements of Qatar’s national population have become the main financial supporter of the Muslim Brotherhood and that they fund Hamas. This is hardly the sort of pedigree that would see the UK’s GCHQ  sign a security pact with Qatar to share classified intelligence and yet that is just what has happened. This is one of the most significant accomplishments to come out of diplomatic talks between Sheikh Tamim and the British prime minister in recent times. 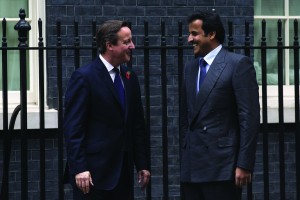 security agencies to help combat the international threat from jihadism and cyber warfare by signing the security memorandum. The new agreement will focus on digital defence and cyber security as well as intelligence co-operation on combating terrorism. It will also include the sale of British security products and services to Doha. The Home Office said, “We are pleased to be working in partnership with the Qatari government… (to) broaden and deepen the important security relationship between our respective countries.”

Sheikh Tamim is said to want more discipline at home and less risk-taking overseas but knows that his biggest challenge is keeping Qatar at the forefront of the Arab world’s development story. He has to do this without the help
of his powerful cousin, Hamad bin Jassim al-Thani, who had been foreign minister since 1992 and also prime minister since 2007. He had become the most dominant figure in government after the former emir and focused on foreign policy rather than domestic policy. His replacement as prime minister is Abdullah bin Nasser al-Thani, who has been promoted from the interior ministry, which he will still run, with a keen focus on domestic issues and policy.

The immediate future for Qatar looks set to be punctuated by breakneck-paced development, increasingly high profile overseas acquisitions and opportunities-aplenty for foreign partners wishing to be part of the Gulf’s next growth story. No doubt the headlines will continue, good and bad, as the pace of development hots up. The important thing will be scratching through the thin veneer on the surface and seeing where the greatest opportunities lie.