Maintaining a world-class regulatory environment for the financial services sector of one of the wealthiest nations on earth is no small task. In an exclusive interview Qatar Central Bank’s governor Sheikh Abdulla Bin Saoud Al-Thani tells Paul McNamara how it’s done.

The banking system in Qatar is subject to two quite separate sources of stress. The first is generated internally and is caused by the rapid pace of development within the country. Fast growth means expanding balance sheets and this can mean banks coping with stresses of their own. From vastly increased business volumes with the same numbers of staff through to banks engaging in new lines of business with which some of their staff might be unfamiliar.

The second source of stress is generated externally and stems from the requirements that banks need to reassess their capital bases in the light of the new Basel III requirements. In Qatar, ultimately, the central bank is the party charged with making sure that nothing goes off the rails.

In December 2013 the QCB, QFCRA and QFMA jointly launched a strategic plan for the future of financial sector regulation in Qatar. The financial sector as a whole has a crucial role to play in realising the goals of the Qatar National Vision 2030 and the strategic plan itself contains six goals, each of which is supported by specific strategies and work plans within the QCB, QFCRA and QFMA. The goals include enhancing regulation by developing a consistent risk-based micro-prudential framework, expanding macro-prudential oversight, strengthening financial market infrastructure, enhancing consumer and investor protection, promoting regulatory cooperation and building human capital.

Matters at home are doubtless more predictable but still involve a lot of oversight. 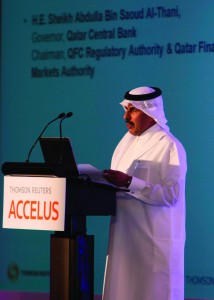 What is QCB’s strategy for ensuring that all regulated banks in Qatar are Basel III compliant?

The Basel III Capital Adequacy was issued to conventional banks and Islamic banks separately in January 2014. Banks have been advised to report on a quarterly basis, both on a solo and consolidated basis. These submissions are required to be audited by the bank’s external auditor prior to submission to QCB… the capital adequacy reports are scrutinised to ensure that the banks have followed the correct intent of the circular. As regards, Liquidity Coverage Ratio, a circular was issued to banks in January 2014 and amended in May 2014 to incorporate the changes effected by the Basel Committee on Banking Supervision. The circular on Leverage Ratio was issued in July 2014 and implementation started with effect from September 2014 as per the finalised BCBS document issued in January 2014. All these submissions are to be audited or reviewed by the external auditors of the banks prior to submission to QCB.

Do you expect to see an increase in the number and size of hybrids issued in the market?

As of now, two banks have issued additional Tier 1 instruments compliant with the eligibility criteria stated in the Basel III Capital Adequacy circulars. As regards other banks going in for such instruments, it is left to the bank’s analysis and policy of their projections of business plans and capital planning. However, when a bank intends to issue such instruments, banks are required to seek prior approval from QCB.

Does QCB have any plans to help develop short-term liquidity instruments for Islamic banks in Qatar?

QCB has recognised the International Islamic Liquidity Management Sukuk as one of the high quality liquid assets in Level 2A as short-term instruments to help Islamic banks in complying with the LCR. In addition to the IILM Sukuk, QCB also recognises Islamic Sukuk issued by any other international organisation. Further, there are certain sovereign Sukuk issued in Qatar which will be eligible as liquidity instruments for Islamic banks.

QCB has successfully issued Sukuk in the past. Do you foresee the need to do so again in the near future?

The QCB has held quarterly auctions of government bonds, both conventional and Sukuk, since March 2013. The type of bonds and the auction volume to be issued in the future depends on liquidity conditions as well as the stance of monetary policy at that time.

What were some of the issues you faced in drawing up your strategic plan for regulation of the finance sector ó bearing in mind how fast the economy is growing?

QCB’s Strategic Plan 2013-2016 has been developed in line with the National Development Strategy 2011-16 to realise the goals of Qatar’s National Vision 2030. The Strategic Plan provides the mission, vision, values and objectives that underpin a coordinated approach to strengthen the financial sector and foster stable and robust economic growth. At the core of this strategy is the development of a diversified and more resilient economy – which will have lesser reliance on hydrocarbon revenues – in which the financial sector will have a predominant role. In achieving the goals of the Strategic Plan, the financial regulatory infrastructure will meet international standards and best practices with the objective to provide a conducive and investor friendly environment.

In addition to building a robust banking sector to support the economic growth and diversification goals, QCB is leading the coordination efforts with Qatar Financial Markets Authority and Qatar Financial Centre Regulatory Authority to provide a stable financial environment to a broad range of businesses. In this context, the Financial Stability and Risk Control Committee was established in 2013 to facilitate regulatory coordination and augment management of systemic risk. As envisaged in the Strategic Plan for Financial Regulation and conforming to international standards, QCB has been moving to risk-based regulation, expanding macro-prudential oversight, enhancing transparency, strengthening market infrastructure, and improving consumer and investor protection.

Progress achieved to date includes a wider QCB’s financial regulatory agenda together with the upgrades to emerging market status by leading rating agencies, the increase in foreign investors ownership to up to 49 per cent for listed Qatari companies, and more recently, the establishment of Qatar as the first regional renminbi clearing centre; all of which have opened up the financial market as part of an important step to develop the financial industry domestically and internationally.