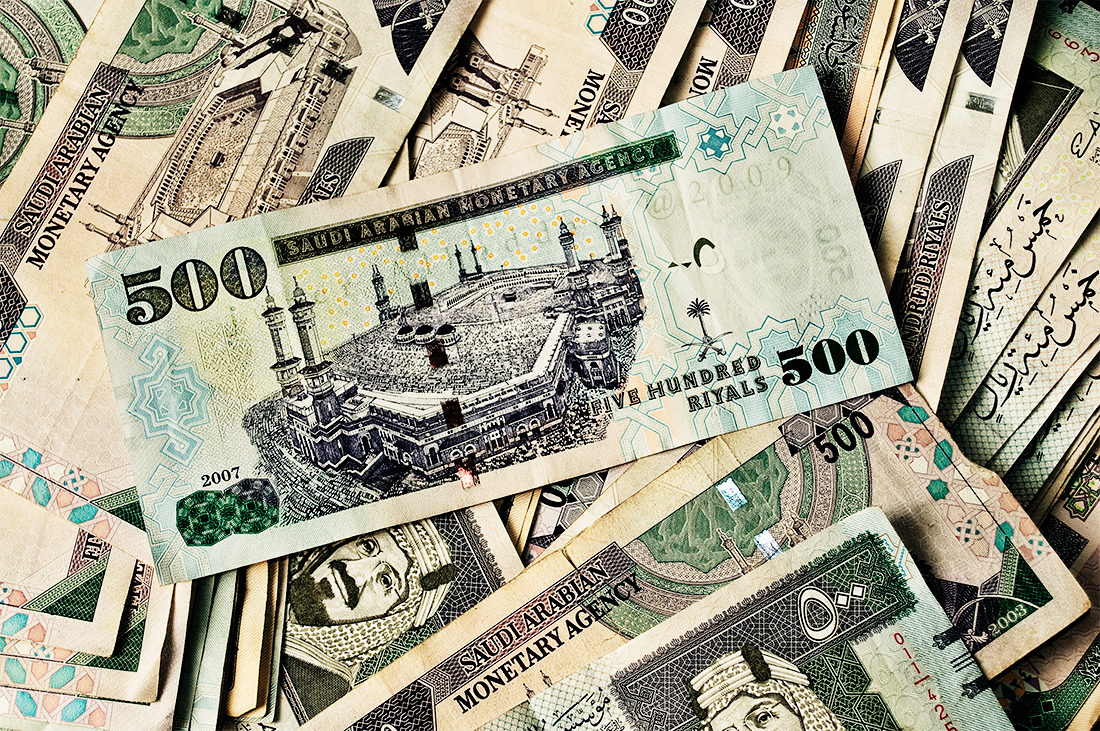 Saudi Arabia – 25 August [Bloomberg] – Saudi Arabia’s pledge to maintain its dollar currency peg, amid oil’s slump to a seven-year low, is likely to be followed by its smaller Gulf neighbors.

Ahmed Alkholifey, the Saudi central bank’s deputy governor for research and international affairs, told Al Arabiya television Tuesday that authorities will maintain the peg at 3.75 riyals per dollar. One-year forward contracts for the riyal, which have surged this month on speculation it may be devalued, fell after his remarks.

Investors have increased bets that the six Gulf Cooperation Council countries will be next to abandon their pegs after China devalued the yuan and Kazakhstan allowed its currency to float. The trade’s premise? The region has about 30% of the world’s proven crude reserves and its governments depend on oil revenue to fund much of their spending.

That argument understates Gulf countries’ currency reserves and investment inflows that allow them to protect the pegs when oil prices are falling, according to analysts and economists including Farouk Soussa at Citigroup Inc. Gulf nations are also large importers of food, consumer goods and equipment, making a currency devaluation unattractive, he said.

“I don’t see a policy desire to move away from the dollar,” said Soussa, the bank’s London-based chief Middle East economist. Abandoning the peg will boost inflation, “which is not a policy objective that countries such as Bahrain and Oman want to introduce,” he said.

Expectation that currency pegs may be abandoned gained momentum after Kazakhstan Prime Minister Karim Massimov said last week that most oil-producing countries, including Saudi Arabia and the United Arab Emirates, will move away from their currency pegs as the world enters a “new era” of low oil prices. Kazakhstan had scrapped a trading band for its currency, sending the tenge to a record low against the dollar.

One-year forward contracts for the Saudi riyal jumped to their highest in more than a decade on 24 August, signalling more bets that the currency will weaken. Contracts for the UAE dirham have also surged this month to the highest level since 2009.

The trades coincided with a further slump in oil prices and less favorable economic forecasts for countries in the region. The International Monetary Fund said growth in Saudi Arabia is set to slow this year and next as the government reduces spending to compensate for lower oil prices. The kingdom’s budget deficit will reach 20% of gross domestic product, it said.

In the UAE, where official data show the oil and gas sector contributed 34% of GDP last year, lower oil prices will lead to its first budget deficit since 2009, according to the IMF.

Brent crude, a pricing benchmark for half of the world’s oil, fell to the lowest since 2009 this week.

A prolonged period of low oil prices, a rapid decline in foreign exchange reserves combined with rising debt would cause countries to adjust their pegs, Raza Agha, chief Middle East and Africa economist at VTB Capital Plc in London, said by e-mail. Rather than abandoning them entirely, the likely response will be a “re-peg at a higher level,” he said.

“The peg should be one of the last things to go, but policy opacity in such countries is very high,” Agha said. “Hence, the most credible thing to say is the peg stays in place, until it doesn’t.”

Both Saudi Arabia and the UAE have sufficient assets to enable them to cope with deficits without abandoning their currency pegs, said Robert Burgess, Deutsche Bank AG’s chief economist for emerging markets in Europe, the Middle East and Africa.

Kuwait and Qatar are even better off due to their stronger fiscal positions, making them the region’s “least at risk,” Burgess said.

“Kuwait, Qatar, the UAE and Saudi Arabia are not under any imminent pressure to ditch their pegs,” he said.

The countries have history on their side. Amid the turmoil of the 2008 global financial crisis, when the price of oil plunged to US$37 from US$97, most Gulf nations stood by the pegs. Kuwait had abandoned its dollar peg in May 2007.

Abandoning them, or re-pegging at a lower value, would undermine investor confidence, leading to capital outflows or weighing on foreign direct investment, Khatija Haque, head of Middle East and North Africa research at Emirates NBD PJSC, said in a report published Tuesday. Moving to a floating exchange rate may add to volatility and undermine trade and investment.

“Even if they are adjusted rather than abandoned, this would in our view add uncertainty about future adjustments, and ultimately make the pegs more vulnerable to speculative attacks,” Haque said. “Devaluation of the exchange rate would also push up inflation across the region, eroding any short term boost to export competitiveness.”

Oman and Bahrain are more at risk than their wealthier neighbors, with less oil to sell, thinner fiscal buffers and in Bahrain’s case, more debt, analysts said. One-year forward contracts for the Omani rial reached their highest level in almost 14 years this month.

Bahrain and Oman are “both running large budget deficits and neither of them have very large stocks of assets, so for them, the pressures are more imminent,” said Burgess at Deutsche Bank.

In the long-term all Gulf countries need higher oil prices, Burgess said. If oil remains at its current level, concern about the currency pegs across the Gulf is “very justified.”