On the road to progress

UP is presently seeing a massive infrastructure shift with the most impressive projects undoubtedly centred on roads, rail and power. This is the face of the future. Victoria Shah reports

For most of its history Uttar Pradesh (UP) has been largely an agrarian society with well-developed farming and dairy sectors that have traditionally catered to a small local or regional market. In the past, the economic development of Uttar Pradesh has undoubtedly been held back by the lack of core infrastructure including roads, rail and power networks.

In an effort to focus on growth opportunities for the common person and to create UP as an investment hub the Samajwadi Government has been tackling infrastructure as its main priority since it assumed office in 2012. Almost three years later the results of these efforts can be seen everywhere in the state.

One of the most significant developments implemented by the Chief Minister (CM) is the creation of the Uttar Pradesh Expressways Industrial Development Authority (UPEIDA) to oversee the development and planning of a new road network that will help to increase connectivity, pivot the
state into a different league of industrial and commercial development and increase its competitive viability.

The remit of the authority is simple enough: build expressways and then develop the areas around them into powerhouses of the nation by creating industries, communities, infrastructure and jobs. Thereby increasing the wealth of the state overall. While some of the projects being undertaken by the Authority are modest, this is not something that can be said about the country’s longest expressway being built under the auspices of the UP authority.

The first mega project will see 300 km of Expressway being built from Agra to Lucknow. Scheduled for completion in the next 21 months at a cost of a cool $3.5 billion, the Agra Lucknow Expressway will single-handedly change commuting dynamics for millions of residents of not only UP and India but also of the million of tourists and business people travelling to the nation annually.

Navneet Sehgal (pictured), CEO of the UP Industrial Expressway Development Authority (UPEIDA), who has pursued the project from the beginning, says the expressway will not only reduce the travel time from Agra to Lucknow to three hours from six, but will also help to boost economic activities. “This will open up an entirely new area for development and will give easy access to Delhi, which is the biggest market for our agricultural produce. Ours is an agricultural economy so we need to provide a market to the farmers.”

Sehgal added: “Akhilesh Yadav had desired that the green field expressway should be designed to facilitate the farmers and milk producers. Five farm mandis [markets] will be developed along the expressway. The Government will also be developing cities alongside the Expressway. This will benefit the masses in UP and the expenditure of the project will be realised through the toll tax.”

More than 3,200 hectares of land passing through nearly a dozen districts was required for the expressway. Officials, led by Sehgal, worked overtime and managed to acquire the land without much confrontation with farmers in a record six-month period. By November of last year some 85 per cent of the land required for the project had been acquired. Sehgal states that the UPEIDA is “confident of completing the work in 22 months”.

The process by which these roads are planned and expressways are built is a very competitive process with each aspect of development opened up to tender for parties both inside and outside India. Naturally, the development of roads is not simply about a single motorway. As Nirmal Singh, founder of Lotus Greens, a real estate development company in Noida and Gurgaon says, “There are many other recent world-class infrastructure projects undertaken in Uttar Pradesh like the Yamuna Expressway, Eastern Dedicated Freight Corridor, Metro Extension and Delhi Mumbai Industrial Corridor.”

The Yamuna Expressway, for instance, is a 165 km long six-lane access-controlled expressway connecting Agra and Delhi. Along this expressway is the F1 racing track, which has hosted F1 Grand Prix races making the development famous globally. The extension of the metro-rail to Greater Noida, another growing city of UP, will help to boost the infrastructure status of the area further and attract additional investors to this part of the country. The proposed Eastern Dedicated Freight Corridor is set to see huge development in the state covering the Amritsar-Delhi-Kolkata industrial stretch across four different states.

In an effort to expand its trade, investments and export this growth spurt can also be seen throughout the nation. Some mega projects being planned by the federal Government also complement and augment the initiatives being carried out by the state. The Delhi Mumbai Industrial Corridor (DMIC) is one such mega project being developed, that will both increase the manufacturing and services base and ultimately give other manufacturing hubs throughout Asia and the rest of the developing world a run for their money.

Manpreet Singh Chadha, vice chairman of the Wave Group, a business conglomerate that operates across various industries says, “Over the last few years we have seen major steps being taken by the state Government to boost the situation of civic amenities in UP. Due to its close proximity to the national capital and cities like Noida and Ghaziabad being a part of the national capital region (NCR), Uttar Pradesh has seen some major projects kick off and others completed in the recent past.”

In addition to the Yamuna Expressway and the Agra to Lucknow Expressway, there are also three metro projects being undertaken simultaneously in Noida, Ghaziabad and Lucknow as well as a monorail project. “Apart from this, the Uttar Pradesh Government is also building the first hi-tech city in Ghaziabad and Lucknow which will definitely bring about a huge change in the state over the course of time,” says Chadha. 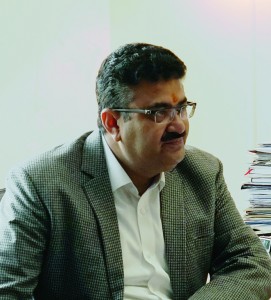 It is not just about roads, railways and metros. There is also a burning need for investment in, and development of, the energy sector in order to power the growth of the state. Sanjay Agarwal, private secretary for energy for the Government of Uttar Pradesh is sanguine about the size of the job ahead and the demands that will be placed on the energy sector as the state grows.

“Power is a catalyst for growth,” he says. The Government’s agenda is to make power available 24 hours a day to all places within the state. At present, rural areas only have power a set number of hours, often only 17 hours per day. The Chief Minister (CM), Akhilesh Yadav, has set an “always on” target that will require around 22,000 megawatts (MW) of energy. “This is more than double what we have at present but is the very ambitious target we have set ourselves,” says Agarwal. The state currently produces 10,000 MW for itself.

Like all other mega projects being undertaken by the state, success involves dovetailing a large number of factors to come together in harmony. In UP’s case it involves not only production but also distribution, for which the planning began in 2013. By 2016 the state aims to have lifted output levels to 17,500 MW from 10,000 MW. The balance required to reach 22,000 will be secured through a public private partnership (PPP) deal with third parties that have international expertise.

This is no small challenge. “Roughly speaking, the investment in the transmission sector in the five-year period from 2007 to 2012 in terms of new service stations was about half a billion dollars,” says Agarwal. “Apart from the increase of supply, one of the most crucial things we want to do is to increase coverage. There are over 170,000 rural hamlets at present that have no electricity and the plan is to connect all of them at a cost of $2 billion.”

All of the protagonists in this task seem to be conscious of the size of the opportunity. It is not for the faint hearted and it is not for small players. The costs are huge, but so are the rewards. “In the energy sector, a major change is taking place. These developments will not only be good for the state but for the country and the world. This is the CM’s vision. The best thing is that his full support, and full trust is there to see this achieved,” says Agarwal.