Myth, religion and history have engaged in a curious interplay in the magical land of Uttar Pradesh. The countless shrines, temples, and pilgrimages make for a fascinating journey but combined with the graceful smiles, incredible handicrafts and tempting foods visiting the vibrant state is an experience one will treasure for a lifetime. Paul McNamara reports

Rich in art, culture, traditions, spirituality, religion, and heart there is a reason why Uttar Pradesh (UP) greets visitors by the million every year. Visitors come to visit the Taj Mahal, others to experience the holy city of Varnasi and the sacred Ganges River and others to shop for the multitude of handicrafts and taste the fabulous food. As a tourist hot spot some choose to arrive by flight via the many network of airports, others by train on the picturesque railways and others by car on the many freeways. In the old days, swanky travellers from far-flung shores would also have arrived on horseback or, for those looking for a more earthy experience, by bullock cart, but sadly those days remain no more.

I decide to be adventurous and choose to go by car from my hotel in Delhi. Once I get used to the bumps and potholes in the road, I settle down as we approach the Delhi Agra Expressway into an almost somnolent rhythm allowing me to relax and unwind, something that is hard to achieve in the bustling metropolis of Delhi.

The drive is picturesque and allows me as a casual observer to take a peek into the everyday lives of the people of Uttar Pradesh. As I look out my window everyone seems to be carrying on going about their business: women balancing uncommonly large bundles of something soft on their heads; men manoeuvring enormous and highly colourful plastic containers on lengths of string; other men transporting two lawn mowers at a time on the backs of their bicycles all with a smile. Feats that would seem improbable elsewhere in the world seem perfectly normal here. My only regret I realise is that I am not equipped with a better camera to capture the images that I am sure will remain with me forever.

A little further on we start to pass tiny structures by the roadside that appear to be made of scoops of dry clay or earth. I think that there are too many of these to be dwellings but yet they seem big enough to house one or two people. Consumed by curiosity, I ask my driver what they are and to my surprise I am told they are mounds of cattle dung that are being stacked for drying.

Dry cattle dung is used as a fuel source since there is so much of it and it is eminently combustible as after burning, the ashes are ploughed back into the fields to ensure the soil remains fertile. It almost feels as if I have been taken back in time to get a glimpse of a way of life that has not changed much for centuries. As we pass the people, the fertile lands and the cars I am in awe of all that I am seeing.

All too soon I arrive at the Taj Mahal in Agra and the journey is over. The Taj Mahal, built by a grief stricken emperor Shahjahan as a memorial to his beloved wife Mumtaz Mahal, is undoubtedly one of the most iconic structures ever built by man and attracts over 4 million visitors every year. Over the ages, countless words have been written about the Taj. I also find myself in awe as I gaze up at the Taj Mahal and am reminded of the quote that describes the Taj Mahal as having been designed by giants and finished by jewellers. The Taj Mahal is truly magical and amazing.

Due to the efforts of the UP Government the queues are much shorter than I expect given the hundreds of thousands of visitors daily. I buy my ticket and realise I am not alone in being in awe of this beauty. I wander around taking too many photographs and knowing that despite my photography skills none of my pictures will even come close to capturing the magic of the real beauty.

It is quite possible to visit Agra on a day trip from Delhi by car. Many leave Delhi early morning and return back in the evening but I decide to stay, explore and see what else Uttar Pradesh has to tempt me. A few days into my trip I am not disappointed. 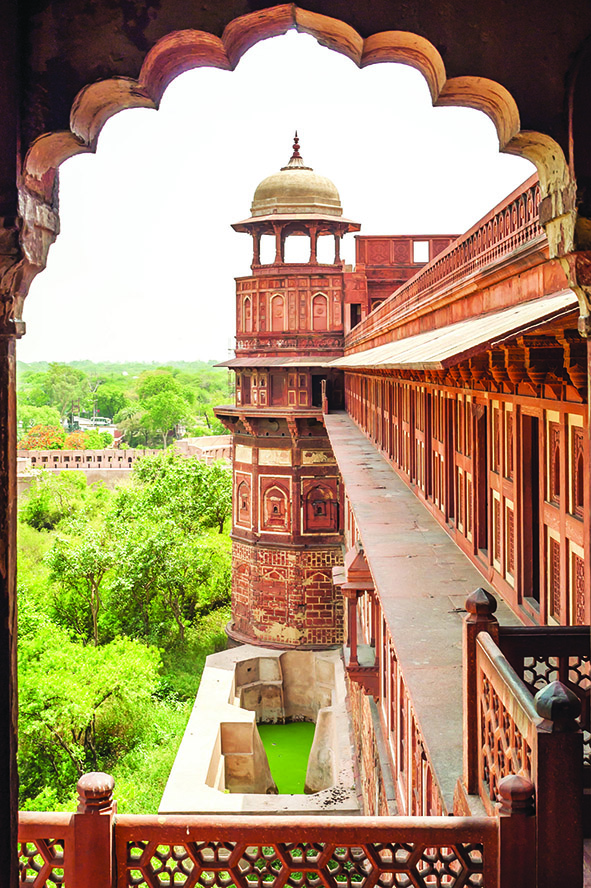 Uttar Pradesh boasts three World Heritage sites. In addition to the Taj Mahal, there is also the Agra Fort and Fatehpur Sikri. I realise I cannot go to UP and visit the Taj Mahal alone and miss out on a panoply of fabulous and historic places and things to see and do. These include exotic and poetically named destinations like Allahabad, Bithoor, Chitrakoot, Lucknow, Sravasti and Vrindavan. Each of which manages to play its part to make for a fascinating and culturally rich state. Of course, tourism means big bucks these days and that makes it a ferociously competitive line of business. Little known destinations scrabble to find unique drawcards in the hope of luring tourists with bulging wallets to come, visit and spend.

Uttar Pradesh displays an exuberant and vibrant culture with its many festivals, monuments, ancient places of worship and viharas or Buddhist monasteries. The tourist guidebooks talk of the Kumbh Mela, the largest peace gathering in the world where millions of Hindus gather to bathe in the sacred river. Held every 12 years in Allahabad the gathering in 2013 saw over 100 million visitors on the banks of the Ganges.

As each day passes and my trip draws to a close I wish there was more time to enjoy all that Uttar Pradesh has to offer. From the historic sites and holy cities, to the handicrafts and delicious cuisine there doesn’t seem to be enough hours in the day to experience it all.

For history buffs, the towns of Sarnath and Kushinagar are located not far from Varanasi and are important both culturally and for religious reasons. Gautama Buddha is said to have given his first sermon after his enlightenment at Sarnath and then died at Kushinagar. Making both places as must-sees for Buddhists looking for a bit of spiritual uplift. Sarnath also boasts the Pillars of Ashoka and the Lion Capital of Ashoka, which have added much to our archaeological understanding of the region. Another must I am told is the 80 km trek from Varanasi to Ghazipur and visiting the tomb of Lord Cornwallis, the former India Governor General, maintained by the Archeological Survey of India.

Uttar Pradesh has more than just monuments to offer. There are heaps of places to stay in the lap of luxury to truly experience the culture and heritage of UP. The Pallavi International hotel in Varanasi, The Mud Fort Village hotel in Bulandshahar, The Royal Retreat hotel in Shivpati Nagar, the Nadesar Palace in Varanasi, the Grand Imperial hotel in Agra and the Jukaso Ganges hotel in Varanasi boast a heritage that is preserved while ensuring that each of its guests is pampered with warmth, and kind hospitality in true Uttar Pradesh fashion.

The Fort Unchagaon hotel in Bulandsahar, for instance, showcases the magnificence and splendour of the early 20th century colonial and Indian style architecture. Every corner of the interior and exterior of the hotel is artistically decorated and must be seen to be believed. Originally, constructed using mud the ancestors of the present owner came into possession of the house by a twist of fate. In 1859, the then owner was a Rajput Zamindar who lost possession of the house to the British after the battle of 1857. The current owner, Raja Surendra Pal Singh became the inheritor of the palace in 1927 when he was just 10 years old. Awestruck by the elegance of the old building he decided to renovate and re-establish it and today, Fort Unchgaon exists as a famous heritage hotel of UP. Even to this day, one can almost imagine Noel Coward, Somerset Maugham and Rudyard Kipling having their tiffin on the lawn.

The slow march of progress is fast catching up with even the most remote parts of UP and wise travellers will do well to try and visit before it all disappears. The tourism authorities are doing their best to preserve this marvelously historic and culturally significant state but when it comes to travelling there really is no time like the present.