A ‘power’ line, not a help line

The Women Power Line (WPL) 1090 is a unique and progressive initiative of the Uttar Pradesh (UP) state Government that aims to provide quick help to women who have been victims of harassment. A specially trained force comprised entirely of women officers was formed in 2012 to attend to calls from distressed women and ensure timely help to victims.

The Facebook page of the WPL already has over half a million Likes, a sign of its popularity with the masses. Deputy Inspector General of Police of Lucknow, Navneet Sikera, is a major contributor and the man behind the success of this women’s empowerment initiative of the state. As the person in charge of the WPL, which began as a pilot project of the UP Police, Sikera is passionate about 1090, its functioning and its results.

“We started 1090 in November 2012 and since then we have learned a great deal about women’s security, safety and empowerment,” says Sikera. “More than 1 million women have already spoken to us about what kind of problems there are and what could be the possible solutions to overcome them. We could have one of the largest depositories of information on such things anywhere today.”

The core issues stem from a truly societal base: “In the past, women’s security had a very low priority with the police,” says Sikera. “It was not seen as a very serious issue and there were many reasons why this was so. Victims would not come forward and most of the time we heard about it through referrers, mostly through journalists. We would then try to solve the issue informally because there was no formal system in place to deal with it.”

In India, girls are taught from the age of five to ‘ignore’ and ‘tolerate’ the irresponsible behaviour of boys. Experience has shown that minor bullying and hair pulling in the sandpit can lead to far more serious behaviour later on. The statistics are sobering indeed: “92 per cent of heinous offences in India happen in the home perpetrated by a relative or someone who is very close to the girl,” says Sikera. “There is fear of rebuke. The police might complete their investigation in three or four months but the judiciary will take seven or eight years. This is a fact. If a girl starts a complaint when she is 18 she might be 26 and married and expecting a kid by the time it comes to court. So for her, it is a lose-lose scenario.”

What the system needed was a means of stopping these offences happening in the first place rather than waiting until it was too late. “That is why we introduced Power Line,” says Sikera. “We don’t call it a helpline because there is a bias in that word. It is not there to help the women.

“It is there to empower them. Across the country, other helplines use the face of a traumatised woman in their advertising, a woman who needs help, who has been harassed. We did not want that. We wanted a smiling face, a confident face.” 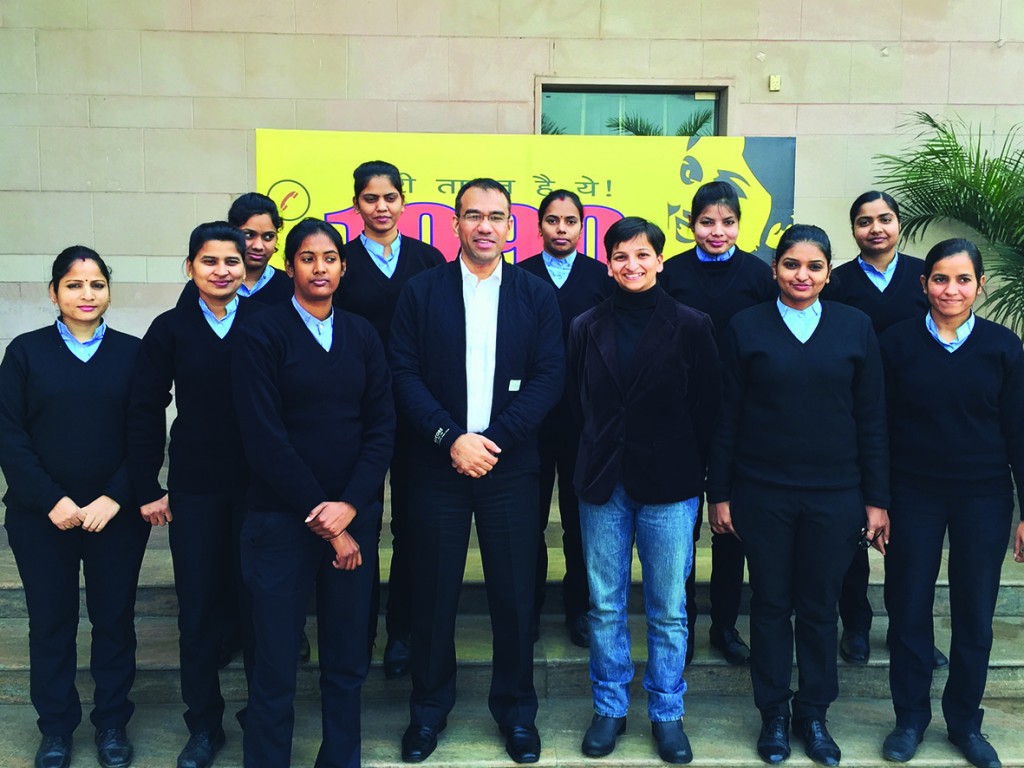 Deputy Inspector General of Police of Lucknow, Navneet Sikera with a group of specially trained officers from the Women Power Line initiative

There are five elements to the 1090 initiative geared towards making women more comfortable: their identity will not be disclosed; they will only talk to women police officers; they will never be called to a police station; the police will remain in touch with the woman until the problem is completely resolved; the police will also remain in touch with them for three months after the complaint to make sure there is no repeat offence.

According to Sikera the success of the service lies in regular follow-ups of both the victim and the accused. While the women counsellors get in touch with the victim on a regular basis, male members of our team simultaneously counsel the accused. “Our boys tell the accused that if he doesn’t stop indulging in such activities, he should know that all his details are with the police and a case will be registered against him and he will not be able to obtain a passport, driving license or any such certificate for which police verification is mandatory. Thus, 99% problems are resolved then and there. Such a warning proves to be very effective and helpful in resolving the problem. We also tell them that they won’t be able to escape even if they change their sim-card because they will be under our surveillance and it will be better for them to mend their ways,” say Sikera.

The more stubborn of the accused will be subjected to the “Friends, Family and Relatives method”, wherein the WPL personnel use call detail records (CDR) to contact and counsel the social circle of the accused. In time, the accused finds themselves in the middle of disappointed parents, jibing friends and condescending relatives. The exceptionally problematic accused is even featured on the Facebook page of the WPL, inviting scorn from the 7,000 subscribers to the page.

The sad fact is that 50 per cent of women in UP are illiterate and many have had a lifetime of harassment and domestic violence. Perhaps 1090 could be just what they have been waiting for. In the two years since the initiative was launched over 1 million calls have been received, cataloguing 288,000 serious complaints and the team has solved 282,000 of them with the balance of 6,000 still in the process of being addressed.

“Whether shamed, scared or tactical, 14,790 of reported harassers have in fact, abandoned not only their unholy pursuits but also their SIM cards after receiving calls from the WPL. “The phone numbers have simply gone out of service. The accused may switch to another SIM card, but they will surely think twice before committing the act again,” says Sikera.

For all its detractors that may reject the service as a gimmick, the numbers speak for themselves. WPL has done much to change societal views on harassment and also with the way the public sees the police, and indeed how the police see themselves. Efficiency, infrastructural superiority, work-life-balance, and job satisfaction are not terms to be heard in discourses pertaining to the Indian police, but all that is changing. The staff of WPL only work in six-hour shifts, and are not required to wear a uniform. Women constables receive a pick and drop facility, and tasks like getting the CDR of the accused take only half an hour.

Sikera says the next two phases of the service will have both social media harassment and physical stalking brought under its ambit. “The WPL started as a project, but boosted by the success, it is now a mission.”